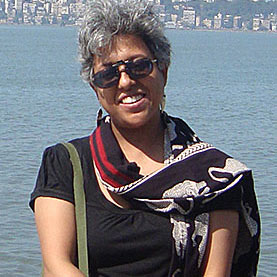 Sampurna chattarji is a poet, fiction-writer and translator. Her fifteen books include the poetry titles—Sight May Strike You Blind (Sahitya Akademi 2007, 2008); The Fried Frog (Scholastic 2009); Absent Muses (Poetrywala 2010); The Scorpion (HarperXXI 2013) and Space Gulliver: Chronicles of an Alien (HarperCollins 2015); the novels Rupture and Land of the Well (both from HarperCollins); a short-story collection about Bombay/Mumbai, Dirty Love (Penguin 2013); and a translation of Joy Goswami’s Selected Poems (Harper Perennial 2014, 2018). She has co-authored Elsewhere Where Else/ Lle Arall Ble Arall (Poetrywala 2018) with the Welsh poet, Eurig Salisbury, and is currently Poetry Editor of The Indian Quarterly. https://sampurnachattarji.wordpress.com