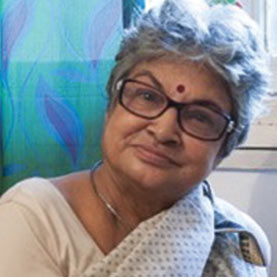 Eunice de Souza (1940) is the author of several books of poems. Her groundbreaking debut Fix was published in 1979 followed by Women in Dutch Painting (1988), Ways of Belonging (1990), A Necklace of Skulls (2009). Her poems are spare, unsettling, ironic, lyrical, referencing a landscape striated with relationships to city, lovers, pets and poetry itself. If Fix established her as a poet with an original and remarkable voice, learn from the Almond Leaf settles that reputation with a volume of poems more distilled, extracted, potent and ultimately utterly wise. Over the last forty years Eunice de Souza has distinguished herself as an inspirational teacher, influencing generations of undergraduates at St Xavier’s College, Mumbai; as a scholar of illuminating research into poetry written in English in the late eighteenth and early nineteenth centuries, and poetry written by women; as an anthologist of several important collections of poetry the latest These My Words: The Penguin Book of Indian Poetry (2012) with Melanie Silgardo. She has also written two works of fiction Dangerlok (2001) and Dev and Simran (2003) as well as several books for children. She lives in Mumbai.