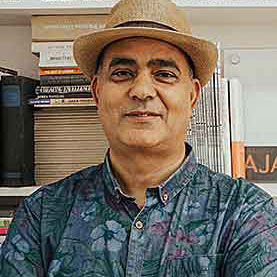 Ashraf Aboul-Yazid (1963) is an Egyptian writer, poet, novelist and journalist.
He is the Editor-in-Chief of the Silk Road Literature Series (since 2016). He has documented his travel writings covering more than 30 countries spanning over two decades.
He was named the Person of the Year in Culture, Kazan, Tatarstan in 2013. He won the Manhae Grand Prize in Literature, Korea in 2014. He was the winner of the Arab Journalism Award in Culture, UAE, in 2015. He is the member of the Egyptian Writers’ Union and the President of AJA (Asia Journalist Association), Korea.
His books in Arabic include-