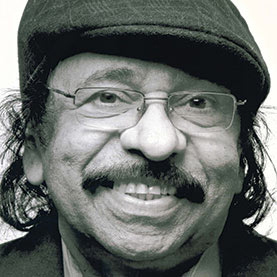 K. Satchidanandan, poet, critic, translator, playwright, travel writer and academic, has published more than 20 collections of poetry in Malayalam. His Collected Poems, 1965–2015 came out in 2016, as did The Missing Rib (Poetrywala), a 600- page volume of his poems, in his own translation. His earlier collections in English include While I Write (HarperCollins, 2011) and Misplaced Objects and Other Poems (Sahitya Akademi, 2014). He has also authored 20 collections of essays on literature, philosophy and social issues, two plays, three travel books and a memoir in Malayalam besides four books on comparative Indian literature in English. He has 7 collections of poetry in Hindi translation and has 25 collections of his poetry in other languages including French, Italian, German, Irish, Arabic, Chinese and English besides major Indian languages. His translations from world poetry have recently been collected in four volumes of around 450 pages each. He has represented India in several literary festivals and book fairs in Asia, Europe, Australia, US and South America. He has won 47 awards for his literary contribution, including Kerala Sahitya Akademi Award (five times, for five genres), Sahitya Akademi Award, Kuvempu National Award (Karnataka), NTR National Award and Bappureddy Award (Andhra Pradesh), Kusumagraj National Award (Maharashtra), Gangadhar Meher National Award and Kavisamrat Upendra Bhanja award (Orissa), besides all the major literary awards in Kerala including the highest, Ezhuthacahan Award. He is a Fellow of the Kerala Sahitya Akademi and has been honoured with a Knighthood by the Government of Italy, the Dante Medal by Dante Institute, Ravenna and the Indo-Polish Friendship Medal by the Government of Poland. His name also figured in the Ladbroke list of Nobel Prize probables in 2011. Satchidanandan lives with his family in Delhi.