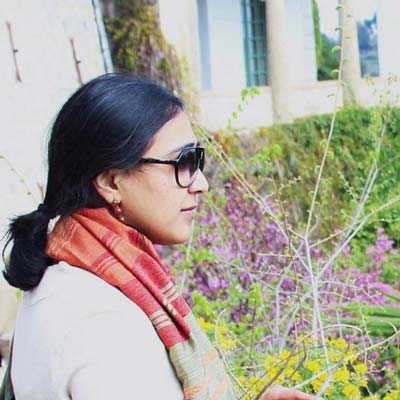 Sabitha Satchi was born in Kerala, India, and educated in Kerala, Delhi, and London. She taught English in Delhi University for fifteen years.

Sabitha is a member of the Afro-Asia project of South African and Indian poets and musicians, Insurrections Ensemble, with four albums and booklets published in South Africa since 2012. She has been invited to read her poetry in many festivals and venues.

Sabitha’s poems in Malayalam, as Sabitha T P, have been published in journals including Mathrubhumi, Malayalam, Bhashaposhini, Madhyamam, Kerala Kavita, Samakaleena Kavita, Anyonyam and Truecopy Think. She has published her essays on literature, art, and cultural theory in several anthologies and journals.

Writer and art curator, Sabitha is now based in New Delhi.