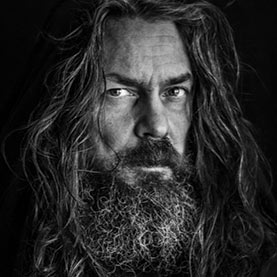 Claus Ankersen, intergalactic traveller, poet, writer, artist, anthropologist and performer, is the author of eight highly-acclaimed books of prose and poetry in his native Denmark. A world leading voice in performance poetry, Claus has performed readings of his renowned literature and poetry at festivals in 19 countries around the world. The author works bilingually in Danish and English, his work ranging from poetry and short stories to longer fiction, and deals with such themes as esoterics, systems-critique, love, revolution and magical reality. Often likened to such luminaries as Alan Ginsberg, Dan Turell, James Joyce and Hunter S. Thompson, Ankersen offers a fresh perspective all his own. Published internationally, his work has been translated into 11 languages, Ankersen is sharing his treasure-chest of perpetually blooming wonder across numerous continents. He works cross disciplinary and inspiration comes from a range of sources, including those of the site-specific, psycho-geography of inner and outer landscapes. Recent publications include the full poetry collections A Sudden Convergence (Krok Books, 2016), Soulmates (Copenhagen Storytellers, 2017) as well as contributions to two Indian international poetry anthologies, Capitals (Bloomsbury, 2017) and All The Worlds Between (Yoda Press, 2017). Latest performance venues include Bucharest International Poetry Festival, Faine Misto Festival in Ukraine and TEDxCopenhagen. India holds a special place in this poet?s heart. In India, Claus holds fellowships from Sangam House, Studio Arnawaz, CMI Arts Initiative and India-North Art & Architecture Ateliers. Ankersen has appeared at Poetry with Prakriti, Delhi Arts Festival, Kala Ghoda Festival, as well as given guest lectures at universities and learning institutes. Having met and interacted with poetry colleagues and titans across the world, Claus Ankersen has realized the need for a formal organization of the global-local sister-brotherhood of hypersensitive pens, most recently founding the activist artist network Army of Poets. When he is not writing poetry, traveling or making art, Claus is developing his own mystery school of yoga and magic, cooking and talking back to nature.