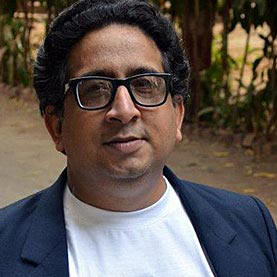 Mustansir Dalvi was born in Bombay. He teaches architecture in Mumbai. His poems are included in the anthologies: These My Words: The Penguin Book of Indian Poetry (Eunice de Souza and Melanie Silgardo, editors); Mind Mutations (Sirrus Poe, editor); The Bigbridge Online Anthology of Contemporary Indian Poetry (Menka Shivdasani, editor); The Dance of the Peacock: An Anthology of English Poetry from India (Vivekanand Jha, editor); To Catch a Poem: An Anthology of Poetry for Young People (Jane Bhandari and Anju Makhija, editors); and The Enchanting Verses Literary Review (online, Abhay K, editor). Mustansir Dalvi’s 2012 English translation of Muhammad Iqbal’s influential Shikwa and Jawaab-e-Shikwa from the Urdu as Taking Issue and Allah’s Answer (Penguin Classics) has been described as ‘insolent and heretical’ and makes Iqbal’s verse accessible to the modern reader. This book was awarded Runner Up for Best Translation at the Muse India National Literary Award in 2012. His translations of the Sufi mystic poet Rahim are published in the anthology Eating God: a Book of Bhakti Poetry (Arundhati Subramanium, editor). His most recent book is struggles with imagined gods – selected translations of the poems of Hemant Divate from the Marathi, published by Poetrywala in 2014. Brouhahas of Cocks is his first book of poems in English published by Poetrywala in 2013. Mustansir Dalvi’s poems have been translated into French, Croatian and Marathi.