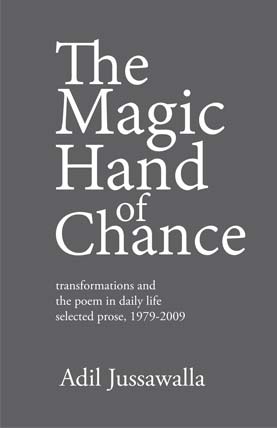 The Magic Hand of Chance

Covering a range of subjects, mainly to do with poetry, its daily interventions, its work, this book adds to the selections of Adil Jussawalla’s prose that have appeared before: in Maps for a Mortal Moon, and in I Dreamt a Horse Fell from the Sky. In his chapter on Jussawalla in a forthcoming book, Vidyan Ravinthiran says ‘[His} time-shifts don’t feel erratic because his prose only becomes inexact when to do so seems the only option – when it comes to resisting subliminal pressures. Every sentence is saturated with thought, changes are rung on prior phrases, in a manner inspired by real-world vexations but not without an element of self-relishing play.’

Poetrywala is happy to offer you more such prose.

‘To observe, to give witness, to hold in the memory the bereaved cow, the boy who has come to deliver the groceries, the poet in transit, the little boy who wet his pants laughing and who wept because a bird died, all these pass under the Jussawalla scanner, all these are transformed by the act of writing. Jussawalla’s fight against the Indian predilection for amnesia is relentless. He will not let you forget.’   – Jerry Pinto, from his Introduction in Maps for a Mortal Moon

‘Jussawalla’s curiosity is patently omnivorous and extends far into many disciplines and knowledges, drawing not least on Parsi, Hindu and Christian sources, science and social science, local politics or birdwatching. A continual subtheme throughout is the memory of Britain and Europe in the post-war years… considered not from an outsider’s point of view but with the deepest sympathy.’

– Vivek Narayanan, from his Introduction in I Dreamt a Horse Fell from the Sky